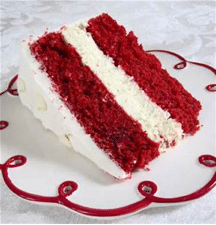 No, I’m not raging about the awesomeness of red velvet…I’m literally in a RAGE about the insanity of the red velvet craze – A RED VELVET RAGE!

Red food coloring is VERY toxic and lends NO flavor to what you are eating, so it’s toxic without even the benefit of enhancing the taste of the dish. Commercial red food coloring (1)contributes to reproductive disorders (2), significant increases in cholesterol, liver inhibition and kidney stress (3), behavioral hyperactivity (4), increased potential for estrogen-dominant breast cancer (5)…Yum, doesn’t that sound scrumptious??

What’s the point?! Why did they have to ruin chocolate cake with cancer?! How did this insanity happen?!

Many moons ago, in a land far, far away (not really), long before artificial food coloring was invented, folks ‘colored’ their cake with ‘red’ (actually brown) sugar, or beet coloring. The ‘velvet’ refers more to the texture of the cake, and there were many different kinds of ‘velvet’ cake: pineapple, lemon, and red, which was simply made with ‘brown/dark’ sugar. ‘Mahogany’ velvet cake referred to the reddish color that ocurred when chocolate was mixed with buttermilk to make the cake. Chocolate powder was, until the 1030’s, more red in color. When manufacturers ‘alkalyzed’ chocolate, the color became the brown we know today. When this chocolate replaced the naturally red chocolate, it was Bye Bye Red Velvet.

In the 1940’s, an extract company here in the U.S., The Adams Extract Company, was struggling for business. They happened one day to be dining at the Waldorf Astoria in NYC, where Red Velvet Cake was being served that was made with beet juice as the coloring. They came up with the business-saavy idea of ‘creating’ a recipe for Red Velvet cake using their red food coloring, even conveniently putting the recipe on the label for all to use.

What really popularized Red Velvet cake in the U.S. was a very widely seen movie came out called Steel Magnolia’s, in which an armadillo shaped gray-iced red cake was featured. This resulted in Red Velvet cake becoming all the rage for brides everywhere.
Voila! Modern, popular red velvet cake was born! And along with it, the up-surge of cancer rates, ADD/ADHD, infertility, liver and kidney disease.

Fast forward to modern times (2016!) and we have red velvet EVERYTHING (raging): red velvet cake, cookies, donuts, donut holes, pancakes and so on!

To make matters worse, there are recipes floating around out in the world (thanks Martha Stewart) for Rainbow Velvet cake…a nuclear-waste-looking monstrosity that is made with layers of cake, each of which is literally a different color in the rainbow (red, blue, yellow, orange, green….argh…I just threw up)!

Here’s the good news. There are now sources of non-alkalyzed cocoa powder, so you can go back to making naturally-colored Red Velvet (gluten-free please) cake with less worry of contributing to your early demise. And, without sacrificing flavor, since red food coloring DOESN’T CONTRIBUTE A LICK TO TASTE ANYHOW!!

So this Valentine’s Day, just stick with good old fashioned chocolate and if you see Red, Yellow, Green or Blue ANYTHING in your food, RUN Forest, RUN! Ohhh…Black Forest cake…now that’s something!